skip to main | skip to sidebar

I know that most of you are probably feeling about the same way. ENUFF FREAKIN SNOW! MC had seen enough snow to last him until next year. He's had a love affair with his snow blower for the last few weeks, and I think he's ready to dump her! He's been shoveling, scraping, chopping and snow blowing every night after work. Poor guy, "He look like he tired!" On the other hand, I've been cleaning, scraping and digging out cars at the dealership. There's over 350 vehicles to clean and move every storm. Some of the smaller sedans, Yaris, Prius and Scions, you can hardly see under the piles of snow. I don't remember storms that dropped this much snow since 1978. I was Tess' age and can remember snow drifts 5 feet tall and losing power for days. Thank God we haven't lost any power b/c we live with electric 'everything'. Heat, water, septic, you get the idea. So, if Mr Groundhog is correct, SPRING should be here soon. But hey, who's counting on that fur ball anyway?
Posted by Sue Parker at 3:59 PM

The Princess & Her Puppy 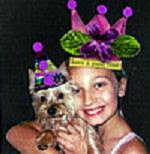